In a given grid, each cell can have one of three values:

Every minute, any fresh orange that is adjacent (4-directionally) to a rotten orange becomes rotten.

Return the minimum number of minutes that must elapse until no cell has a fresh orange.  If this is impossible, return -1instead.

Given a 2D binary matrix filled with 0’s and 1’s, find the largest rectangle containing only 1’s and return its area.

You are given a map in form of a two-dimensional integer grid where 1 represents land and 0 represents water. Grid cells are connected horizontally/vertically (not diagonally). The grid is completely surrounded by water, and there is exactly one island (i.e., one or more connected land cells). The island doesn’t have “lakes” (water inside that isn’t connected to the water around the island). One cell is a square with side length 1. The grid is rectangular, width and height don’t exceed 100. Determine the perimeter of the island.

If a land has 0 neighbour, it contributes 4 to the perimeter

If a land has 1 neighbour, it contributes 3 to the perimeter

If a land has 2 neighbours, it contributes 2 to the perimeter

If a land has 3 neighbours, it contributes 1 to the perimeter

If a land has 4 neighbours, it contributes 0 to the perimeter

The demons had captured the princess (P) and imprisoned her in the bottom-right corner of a dungeon. The dungeon consists of M x N rooms laid out in a 2D grid. Our valiant knight (K) was initially positioned in the top-left room and must fight his way through the dungeon to rescue the princess.

The knight has an initial health point represented by a positive integer. If at any point his health point drops to 0 or below, he dies immediately.

Some of the rooms are guarded by demons, so the knight loses health (negative integers) upon entering these rooms; other rooms are either empty (0’s) or contain magic orbs that increase the knight’s health (positive integers).

In order to reach the princess as quickly as possible, the knight decides to move only rightward or downward in each step.

Write a function to determine the knight’s minimum initial health so that he is able to rescue the princess.

For example, given the dungeon below, the initial health of the knight must be at least 7 if he follows the optimal path RIGHT-> RIGHT -> DOWN -> DOWN.

花花酱 LeetCode 864. Shortest Path to Get All Keys

We start at the starting point, and one move consists of walking one space in one of the 4 cardinal directions.  We cannot walk outside the grid, or walk into a wall.  If we walk over a key, we pick it up.  We can’t walk over a lock unless we have the corresponding key.

Return the lowest number of moves to acquire all keys.  If it’s impossible, return -1. 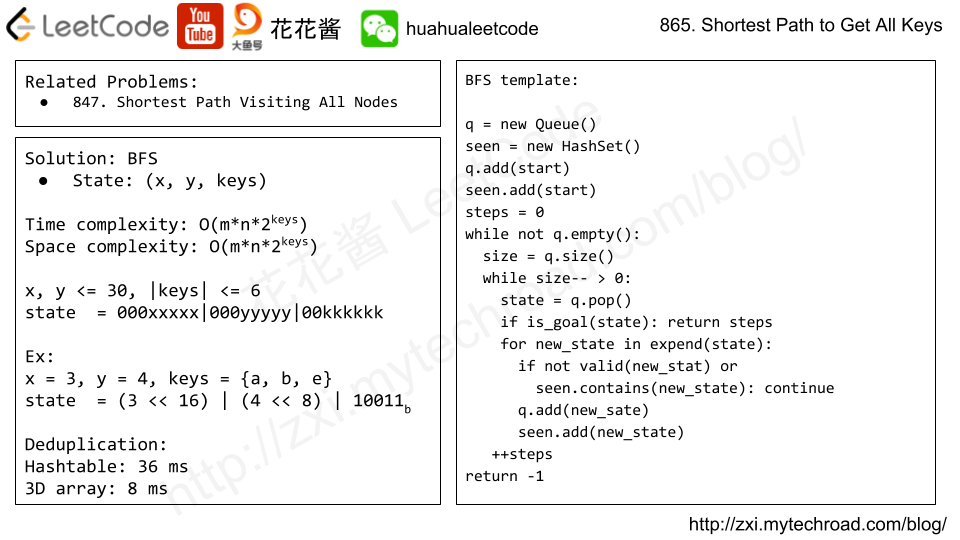